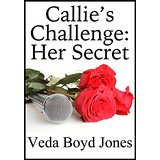 Callie’s Challenge: Her Secret begins six months after Callie’s Song ends.
Morgan P. Rutherford, III, known to his music fans as Trey, is in a freak accident. Callie is his main support through this awful ordeal, but as he gets stronger, she seems withdrawn to him. He wonders if he’ll ever sing again, and is concerned that something more than getting to know the father she didn’t know existed until last summer is bothering Callie. But what?

Q & A with Veda Boyd Jones regarding Callie’s Challenge: Her Secret

Q: Why did you write a sequel to Callie’s Song?

A: Callie’s Song came out as a paperback with the title Callie’s Mountain from Barbour Books. It was voted best contemporary novel by the readers for its publication year and the editor asked me to consider a sequel.

Q: Since Morgan and Callie marry at the end of the first book, how did you come up with the conflict for the second one?

A: I didn’t want to give them marital problems because the readers loved them both, so I created an external problem. I gave Morgan an accident that was suffered by my sister, so I knew the medical parts of it. Of course, he would struggle with maybe not being able to ever sing again. And I gave Callie a secret that she kept so he could concentrate on getting well instead of worrying about her.

Q: Why add the character of Jeff, the teen hurt in the car wreck?

A: I’m the sole female in a family of males (husband, three sons), and I know men are real babies sometimes when they are sick. I played that stereotype up with Morgan, who’s a very likeable guy, but who is typical male and wanted all of Callie’s attention. I wanted him to suffer a little and really appreciate her, so I let her give time and attention to Jeff until Morgan could take the initiative and help Jeff, too.