Who Will Live in My House?

Our house was built nearly 60 years ago, and we have lived here the last 30 years of its life. People lived here when we found this house, but they weren’t here during that Sunday afternoon when we cruised open houses looking for a special place to raise our sons. 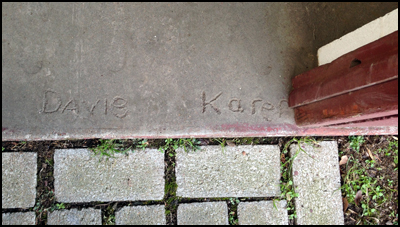 This house had five or six owners before we moved in. I don’t know who they were, although I know the man who built this house for his family.  Two of his kids signed their names in the concrete on the back porch.

He came over a couple years ago and looked around the main floor.

“I really love that stone fireplace,” I told him. Many of the stones are laid flat, like in nature, and it soars to an angle that matches the high slanting ceiling.

“Later owners put the stone on it,” he said.

I showed him his kids’ names in the concrete.

“Someone else screened in this porch,” he said. 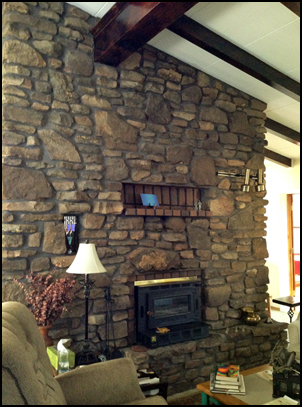 The beautiful fireplace and that gigantic screened-in porch were two of the selling points of the house for us, and now I learned that one of the owners in-between the builder and us put their stamp on this house.

I didn’t ask if he’d put in the little fish pond (now empty) under the cedar tree or planted the hundreds of daffodil bulbs that provide a sunny border for our huge yard every April.

I’ve never been curious about those other owners, but I’ve enjoyed the changes they made. Some people have actual genealogy charts made on their houses, but my mind has gone the opposite way.

Who will live in my house after we move out? Not that we’re planning on putting this house up for adoption anytime soon. But someday someone else will warm themselves by the fireplace in the family room we built on not long after we moved in. I hope they are readers, since two walls are covered with bookshelves.

Will they find the hidey-hole in the pantry? It was an intake hole for the stone fireplace before we put in an insert. That hole is empty, but I wrote it into a children’s book as the place a boy kept his special baseball cards.

Will the people who move in here know that the east window in the kitchen is the best place for African violets? Mine thrive there, even though they are right behind the stovetop. (Who uses more than two front burners anyway?) 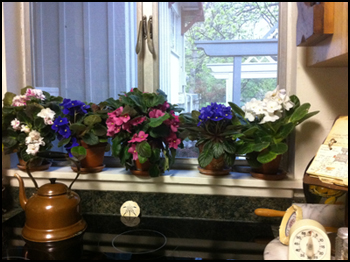 Will they raise a family here? It’s an oddity in this day and age, but only our oldest son, Landon, remembers another family home. Morgan was two when we moved here, and Marshall has never known another family home. When our sons come home for Christmas, they sleep in rooms where they grew up.

I’m familiar with every inch of this house, from the drawer that sticks in the kitchen to the little crack in the bedroom window that was there when we moved in. I know how to dodge the squeak on the third, fifth, and eighth stair-steps so I won’t wake Jim if I’m up in the night, and I know that the quiet place to change my viewpoint and attitude is to sit on the top rung of the bookcase ladder in the family room.

I know this house.

But who will come after us? And will they appreciate the changes we’ve made to this place? Its personality hasn’t changed, but we’ve given it a haircut or two. We’ve built and painted and planted and pruned. Have we left changes like the stone fireplace and the screened-in porch that will enhance its character for the next people who eat breakfast here and dream in these bedrooms?

This is our home. But who will live here next? Will they love it, too?