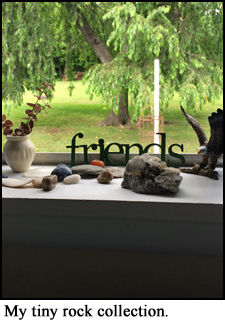 What is that special call to collect rocks? For me, it can’t be the memory of the place where I picked one up, since I can no longer remember where each one came from, which is pathetic. I only have a handful I keep on the windowsill of one of my office windows, so you’d think I could keep them straight. True confession–the lowest grade I got in college was a C in, you guessed it, geology. Yet here I am feeling sentimental about a few rocks.

Jim’s collection wasn’t rocks from places but rocks with holes in them, mostly picked up from our Missouri yard, which I figure has an inch of topsoil covering three feet of rocks. They reside on the side of the barbecue stand on the patio. 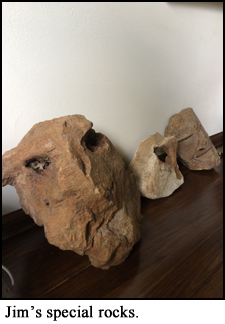 On the sideboy (okay, some elitists call it a sideboard, but you won’t find those folks living in this house) near the kitchen table are three special rocks. One was a gift from neighbor/artist Bill Meeker. He saw faces in rocks and with a few deft strokes of paint made the rocks come alive. Next to it is a rock with a big hole found at writer Vicki Grove’s place in the MO woods before she moved to Indiana. That hole may be an eye. Friend Jerry Hickenbottom discovered the boulder on his land, and the moment he saw it he said aloud, “Jimmie’s got to have this.” The rock is huge and the face unmistakable. 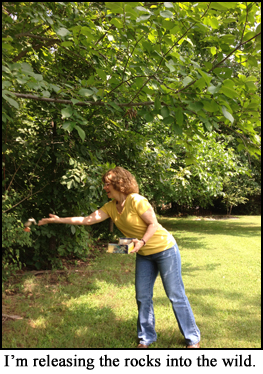 Although I don’t believe Landon or Marshall cared about rocks, our middle son, Morgan, had a rock collection from his youth. When I was cleaning out a closet, I came across it, and since he hadn’t lived at home in well over a decade, I thought it was time he took it. He had earlier sent a Mother’s Day card that said, “Thanks, Mom, for keeping watch over all the old junk I’ll never move to my place.” I laughed at the appropriate card, but decided he, not me, needed his rock collection. Next time he was in town, I would send it home with him, and I told him so when he called a few days later. He said, “No, thanks. I think the time has come to set them free. Return them to the wild.” So, I threw them into the woods behind our house. I hope they’ve survived.

What is it about rocks that makes us pick them up? Is it because they are ancient? Is it our connection to Mother Earth? If you’ve ever picked up a rock and slipped it in your pocket, perhaps you can tell me why you felt the call.