I knew it was coming. For each of the last few days, I’d seen a solitary ant scout in the kitchen. I thought by ambushing the first scout, I’d keep him from reporting back to the others that there was a big treasure in this house. I’d recently refilled the sugar canister, and I should have known better. That should have waited until after this annual spring rite.

After I got rid of that first ant, the next day his cousin was on the kitchen floor, yet I didn’t see more than one a day. I looked outside to see if I saw other ants. None. But I knew the cycle of life was gearing up for the spring confrontation.

And it came this morning. Downpours the last few days must have flooded ant tunnels and driven them inside. A chain of ants ran all along the bottom edge of the upper cabinets. I carefully followed the little guys from the kitchen window to the big window in the eating area. 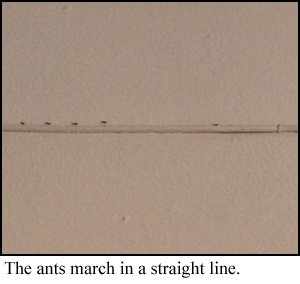 When he came in the kitchen, he gave me a Yogi-Berra-déjà-vu-all-over-again look.

Our house is about sixty years old, so the windows aren’t exactly a tight fit. We’ve talked loosely about replacing them, but I’ve always thought we needed a little fresh air leaking in around the edges.

Anyway, I traced the trail. Jim doesn’t get as excited as I do with the annual trouble, so he just watched and helped me down from a bar stool when I got up high to see why in the world they could be going up that tall wall.

I tried to remember Benjamin Franklin’s ant experiment about how ants leave something on the trail so the ants that follow can find their way. I’ve forgotten whatever he discovered, and when faced with ants in the kitchen, I do not reach for a device to Google ants and Ben. 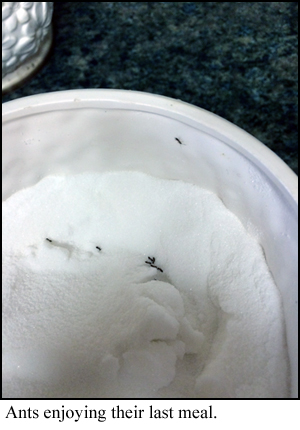 In the past I’ve used vinegar to get rid of them and ant hotels, but I’ve learned that nothing gets rid of them like Raid. I sprayed the two ends of the chain, wiped away the trail, and emptied the sugar canister in the woods. Wild animals will get a sugar high today.

I also went outside to see where the ants were getting into the house, and I couldn’t find a single ant, but I sprayed a bit anyway. I’m not really one for using chemicals, but I do not like ants in the kitchen. If I spot an anthill in the yard, I leave it alone. They have the right to live, too. Just not in my kitchen.

This afternoon, I found an ant on a coffee cup in the cabinet. He was alone, so maybe scouts are being sent out again or maybe I missed him earlier. At any rate, he will not be reporting back.

And maybe I’ll have to repeat this routine again, but the ants will get the message that I mean business.

Except I meant business last year and the year before that, and they have returned. I guess they didn’t learn that lesson, but I learned from them years ago to keep an opened brown sugar bag in an additional sealed plastic bag.

Sometimes pesky things do teach us that what isn’t avoidable can at least be managed with minimal damage. This annual confrontation will be over soon. These things always pass. I need to learn that lesson this year. And not to fill the sugar canister to the brim in the spring.