Nothing Dangles From My Rearview Mirror 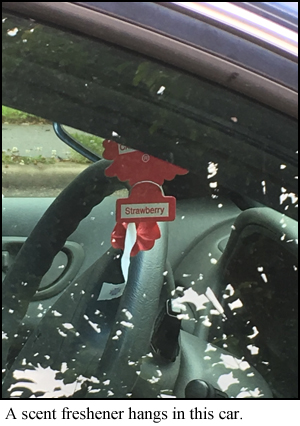 On my morning walk, a car passed me with stuff swaying from the rearview mirror. I glimpsed an employee’s lanyard badge, but I couldn’t make out what the other things were. Always aware of how details develop characters, I wondered if rearview mirror paraphernalia tells us anything about the driver. I cleverly deduced (à la Sherlock Holmes) that the car’s driver had a job that required the security of a badge.

I saw a parked car with a single air freshener hanging over the dash. Again, I shrewdly inferred this car’s owner liked a strawberry smell. What had happened in the car that required a covering scent? A smoker? Someone got sick? A dead body? (Too much TV for me.) 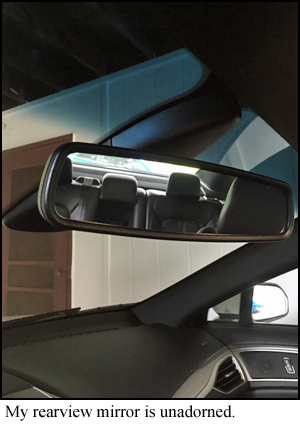 A lot of people have been to New Orleans, judging from the Marti Gras beads hanging in cars. I’ve been there recently, too, but I didn’t earn any beads in what I’ve heard is the traditional bawdy way.

Nothing dangles from my rearview mirror. Once a friend gave me giant fuzzy purple dice to hang because my little Miata convertible’s attitude called out for it. Several times I thought the swaying in my peripheral vision was a car, so I took the dice down. I may not be the best driver around, so I didn’t need an additional distraction.

Now that I drive a sedate sedan, the car doesn’t beg for trinkets on the rear view mirror. And although I didn’t see a rabbit’s foot or a St. Christopher metal hanging from any mirrors on my walk, I’ve seen those before. So perhaps dangling things in a car are more for safeguarding the occupants. Except for those Mardi Gras beads.

What’s hanging from your rearview mirror? Anything now? Our character changes with time. Did you used to have dangling items that reflected who you were then?