I don’t always think about Mrs. Coker’s lamp on my November birthday, but there are times when that awful memory pops up.

As a high school freshman, I had Mrs. Coker’s civics class. She was a stern taskmaster, and I was not just a little afraid of her. I practically memorized the constitution, and to this day I have never missed voting in an election since she taught me that it’s an honor and my civic duty. 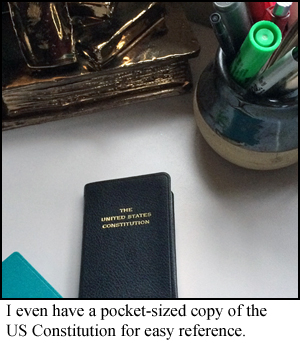 One day Mrs. Coker asked me to stay after class.

That was true, but we weren’t next-door neighbors. We had just moved to our new house in the country, which in town terms would have been a couple blocks distance from her house.

“I’m looking for some help with housework, and I wondered if you and your sister would like to clean house for me once a week after school?”

I must have nodded.

“It would mean vacuuming, dusting, cleaning the bathrooms, and sweeping and mopping the kitchen.”

Those were normal chores at home, so it wasn’t like I didn’t have experience.

“Ask your sister and let me know tomorrow.”

I believe she quoted something like a dollar and a half for each of us.

Elaine thought it was a good deal. Our folks agreed, so we started cleaning house for spending money.

The first time, Mrs. Coker was there with us. She pointed out the special cleaner she wanted used on the chrome bathroom fixtures, so the metal didn’t get scratched with A-jax.

She pointed to a special glass lamp on a table by the living room window. “Don’t move the lamp. I got it at the Seattle World’s Fair.” It was an ugly lamp. Its milky glass bottom with flowers balanced on brass legs, and balanced on top of that was a white glass globe with more flowers that housed the light bulb.

Once when Elaine and I were working alone in the house, I was dusting, and I said, “Oh, no, I broke the lamp.” Elaine came running from another room and saw I was joking.

“That’s not funny,” she said, although I got a laugh from her quick reaction.

A couple weeks later, on a late November Friday, I wasn’t laughing. I moved the lamp to dust under it since there was dust buildup between those ornate brass legs. The globe toppled to the table and broke. Not just cracked, but broke into three pieces.

“Oh, no!” I shouted. Again Elaine came running, and this time her look was absolute horror.

“You moved the lamp!”

“She hadn’t dusted under it in a couple weeks,” I said, trying to shove blame onto Mrs. Coker. “What can we do?” I was in tears.

It was my fault. I had hurried. It was my birthday, and at home awaited supper I had chosen (enchiladas), my strawberry angel food birthday cake, and presents.

When Mrs. Coker arrived, Elaine broke the news to her. I just couldn’t talk.

Mrs. Coker walked to the living room and gazed at her treasured lamp.

“I must not have tightened the globe. I changed the bulb to an orange one for the season,” she said.

“It would take years,” she said. She looked like she was grieving the death of a good friend. “I doubt I can find a match,” she said. “Hand painted.”

That made me feel worse, and I desperately wanted out of that house.

She paid us, even me. “I’m so sorry,” I said for the fortieth time.

She nodded and we bolted into the dusk of a November evening and ran home.

I wasn’t hungry for my favorite food in the world. The cake meant nothing to me. I blew out the candles. I couldn’t change time to back before I moved that lamp, but I know that’s what I would have wished for if it had a ghost of a chance of coming true.

Why is it that we remember the worst moments of our lives in such detail?

That certainly wasn’t the worst moment I have lived through, but at the time it was HUGE. And I had to face Mrs. Coker in class on Monday.

To her credit, she acted as if nothing had happened. She didn’t pick on me in class, and she didn’t ignore me, either.

Mrs. Coker’s influence on me lasts to this day. Oh, I don’t always think of the broken lamp on my birthday, but I always try to be a good citizen, in part as a result of her teaching, and probably in part as guilt over the lamp. I owe her that much. I do diligent research before making up my mind how I will mark my ballot. I even get on the Missouri secretary of state’s website and read amendments in full so I understand them before going to the polls.

Thanks, Mrs. Coker, for teaching me the basics of government and for showing me that when someone makes an unintentional mistake, we accept it and move on.