Comfort from a Cup of Tea 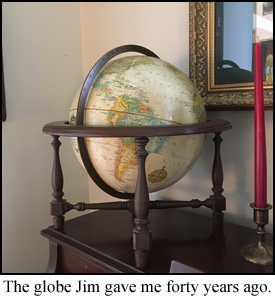 I am the worst gift-giver in the world, but Jimmie was the best. He actually gave thought to a gift, where my default lately is Amazon gift cards.

For Jim I’d get shirts, sweaters, special white socks (he said if he were rich he’d wear a new pair every day), that sort of no-thought thing.

He gave me gifts that meant something to me.

Back when writers submitted manuscripts to publishers by snail mail, he bought and installed a giant mailbox that would hold my submissions and (unfortunately) hundreds of rejections.

On the Friday afternoon I pulled out of that mailbox a large envelope holding book jackets for my first book, I was over the moon. The next morning I attended a two-hour monthly meeting, leaving Jim in charge of the boys. He hauled them to a framing shop, insisted on immediate work, and when I returned, one of the book jackets was beautifully framed and hanging on the wall. 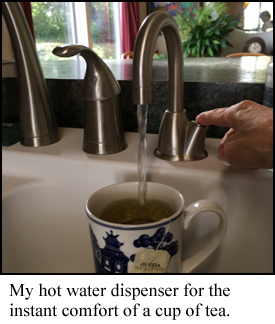 Because I enjoy hot tea in the fall and winter, he once gave me a HOT water dispenser for the kitchen. And he installed the small water heater under the sink. I had instant cups of tea without putting water in the kettle or in the microwave.

Once for my birthday, he gave me a framed lithograph by Charles Banks Wilson. I had interviewed the artist and sold the article to Highlights for Children, so a piece of art by him was so special.

Our first Christmas (we’d been married about six weeks), he gave this history major a globe so we could see how vast our world was and see all the places we could go. He also gave me a long flannel nightgown.

I didn’t see the romance in that one, but he said because the old farmhouse we rented was so cold, it was a warm gift. And it was.

Our first Easter, he brought me a fern, which still sits green in the family room–forty years later. 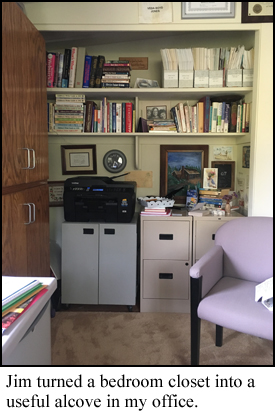 Because at one time I worked at my computer in the far corner of the family room and couldn’t hear the doorbell, he bought and installed a loud doorbell for me.

He gave me countless other things from a solid kitchen step stool to a Miata convertible parked in the driveway on Christmas morning with a Santa hat on the dash.

Jim’s spirit of giving is in every room in this house, certainly in this office, which he transformed from a bedroom. When I hear the doorbell chime or make a cup of comforting tea, or even pull campaign ads from the giant mailbox, I think and sometimes say aloud, “Thank you, Jim.”

Yes, he gave me a fair share of flowers (a male default), which I loved, but I’m not the perfume and jewelry type (another male default), and he knew that because he knew me. He listened to me. He paid attention to what was important to me. And that was his greatest gift of all.

P.S. I wrote a couple months ago that the way to treat a new widow is to listen to her talk about her beloved. You’ve done just that. Thanks.