The Recipe on the Refrigerator

During the holiday season, I turn to my two recipe boxes of 3×5 cards for tried and true delights. Many of these recipes are written in my own hand, or rather my own younger handwriting of forty years ago.

Back then, when I was headed for my first apartment at graduate school and didn’t own a cookbook nor have the money to buy one, I fingered through Mom’s recipe box for valuable recipes I could fix in my first ever kitchen. I’m talking about basic recipes like cornbread and Grandma’s dishpan cookies. Many of the recipes had names associated with them, and some I added.

“What’s this Mexican wedding cookie? Have I ever had it?” I asked Mom.

“That’s Athalie’s recipe. You ate half a dozen when she brought them over.”

I read ingredients. Pecans, butter, powered sugar. “Oh, I remember. They melt in your mouth, they’re so good.” On my card, I named them Athalie Rounds, after our neighbor, and if I share that recipe with others now, that’s the name of the cookie that goes on the top of my card.

Some names are changed by whim. The boys renamed the recipe for peppernut cookies because they thought they resembled Scooby Snacks from the cartoon. My card still has the real name, but we never call them that, and when I give the recipe away, I write the new name.

Oh, I know I’m a step out of time with these cards. 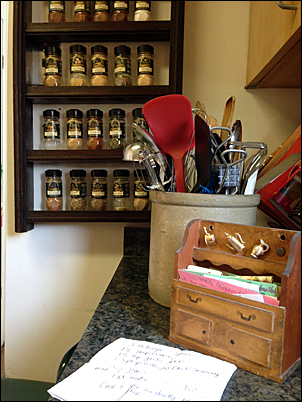 Nowadays if I want a recipe for potato salad that tastes like Red, Hot, and Blue’s yummy dish, I just Google it, print it, and head to the kitchen. When he requested a potato casserole for Christmas breakfast, our son Marshall took a picture of a hand printed recipe and texted it to me, and I referred to my phone at the grocery store so I could pick up the ingredients.

How handy. But I didn’t take time to print it from my phone (and I know this is possible with my Wi-Fi printer), so now I have to scroll through hundreds of texts to find the recipe.

But at holiday time, especially at holiday time, I look for more than a recipe. When I’m flipping through those cards, I see the handwriting of friends and relatives, and I find little side scripts of advice. “I use twice the dates, so the pinwheels are thicker.” Or “I like to add a dab of mustard to the meatballs to offset the sweetness of the cranberry sauce.” And I remember the friend and the occasion when I got the recipe or tasted the dish for the first time.

It’s like looking back on my life and the people who have touched it. And those recipe cards, in cramped writing to get all the ingredients on there, give a bit of immortality to the cook. Aunt Irma’s potato rolls will live on, and she’s been gone some twenty years ago.

Many of the recipes in my two boxes are written on special cards that start “From the kitchen of…” and then a handwritten name. Others are written on scraps of paper. The recipe for Fred and Red’s famous chili is written on a napkin that I got when we were having hamburgers at the Trop one night and ran into a friend of a friend of a former employee of that now closed Joplin landmark who knew the secret family recipe by heart. That napkin is folded carefully and takes up more than its share of space in the recipe box. And I must admit that I’ve taken a picture of the recipe and texted it to our son Morgan.

Some recipes didn’t make it to the box. When son Landon texted last week and wanted the recipe for Mexican Madness (flour tortillas slathered with cream cheese, sprinkled with chili powder, chopped green onions, chopped black olives, and sprinkled a bit more sparingly with chopped jalapenos, then rolled up and sliced), I had to guess at approximate amounts of the ingredients. Some recipes are just by feel and memory, but I recall the acquaintance who introduced me to them at an office Christmas party in Tulsa decades ago. I should have written her name on a recipe card.

My sister, Elaine, was in a friend’s home the other day and saw her own recipe card with her name on it stuck on the refrigerator.

“What a surprise. I’d forgotten about that potato dish,” she told her friend. “But I’ll make it next week. It’s delicious.”

That’s the beauty of these wonderful little cards. You never know where they’ll show up. Or for that matter, who will pass on your recipe.

Got a favorite? Pass a recipe card to me, and when I share the recipe with someone else, it just may have your name on it. And that recipe may live on and on and on.