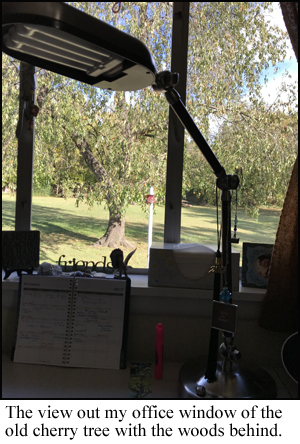 I recently bought the woods that border my backyard. Jim and I wanted that undeveloped land since we moved here 34 years ago. When deer or fox would enter our yard from the woods, we’d call to each other to come see the wildlife right here in the midst of town. I still delight in seeing the woods’ creatures, and I still call to Jim (now in the blue beyond) that the deer are out back. Isn’t there something in all of us that hears the call of nature?

A few weeks ago I visited friends in the Dallas area. My GPS led me to their street, Rainforest Lane. Nearby was Shadetree Lane. Both were urban streets recalling nature. As we drove around the area, I noticed the names of subdivisions with their stone and brick entrances. Of course, Oak Ridge (also a street near me here in Joplin) and Brookside (also a Kansas City area where one of our sons lives) were right there in Texas. Star Creek, Cottonwood Bend, Bridgewater Crossing, Spring Meadow, Quail Run, Arbor Lakes, and Orchards were represented amid the six lanes of heavy traffic. Those names probably appear in other cities, too, just like most towns have an Oak Street and Elm Street and Poplar.

I’m fortunate to live in the Midwest where we have four distinct seasons. My favorite is this time of year when the trees magically change to brilliant colors. Yes, I had botany in school and am aware of chlorophyll masking the colors of leaves until it’s gone in autumn. I love the green leaves of spring, but the oranges, reds, and golds of fall are my favorite. Trees on opposite sides of the street with branches holding hands above the pavement and variegated colors dappling the road make me smile with joy.

Now I can walk in my own little woods and watch the miracle of maple leaves turning color and falling and the russet leaves of the oaks holding on for several months. But I’ve been thinking since that trip to Dallas that what I need now is a name for my little acre with its old house now called “mid-century modern.” This is hardly an estate, but still…. I don’t need to think of a nature name since I actually have a bit of nature in the woods. But what? I believe “Miracle on 34th Street” has been taken for a movie. When the moon is full, I love seeing the moon shadows of the big cherry tree in the back yard. But “Moon Shadow” has been taken, too, for a song. Thomas Jefferson named his house “Monticello” (little mountain), but there’s no mountain here, even if there is a rise to the backyard. So what name?