A Time for Everything

I’m not very good at killing live things. Spiders, yes. I can squish those without guilt. Other bugs, I usually carry outside and give them a new start, especially crickets. But I’ve started killing live things, and by that I mean plants.

I carried a large multi-blooming, but black on the red edges, poinsettia out to the screened-in back porch. It was in the way, and its season has been over for some time. I knew it couldn’t survive the below freezing weather of last week, but I did it anyway.

For reasons that defy science, it’s still living for now, but weakening. By taking the action of getting it out of the house, I’m ready to clean out scraggly green things that have survived for years in planters with very little dirt.

Jim loves airplane plants, but I’ve had my fill. At one time, we had fifteen in various stages in this house. Once planted, they keep sending off runners, and Jim keeps planting the new ones with the gentleness with which a father handles a newborn baby.

Other than the new airplane plants, our plants are old.

Jim gave me the fern our first Easter together, 38 years ago. I know I could replace it with a healthier looking plant, but it’s part of the family now. 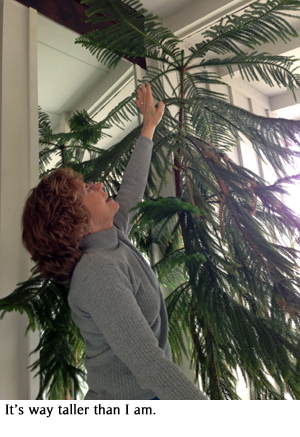 The Norfolk pine was sent to me at the hospital when Morgan was born. Thirty years ago, a sudden gust of ferocious wind blew it off a table, beheading it. I thought it was over for the little tree, but no. It has flourished. Now it’s way taller than I am.

So, those two plants will stay, and the others will, too, but in different forms. They’re going to get new dirt, and I’m going to take cuttings from the scraggly plants and start them anew in water.

Because spring means renewal. The old is cast off and the new comes to life.

But here’s the deal. I make this vow every year that I will clean up these plants before I move them back to the screened-in porch. But I get too eager to get the firewood off the porch, clean it up, and dress it in green plants. The same goes for late fall, I vow I’ll clean them up before I move the plants inside, but then I get too anxious to beat the killing frost that will descend in mere hours.

This year I will do it. I mean it. Really.

The thing is, I feel the spirit of plants, and it’s hard for me to actually start cutting on them, but this year will be different. Now that I’m slowly torturing that magnificent 15-flower poinsettia, I’m going to be ruthless with the rest. I’ll just think of it as giving them a haircut.

I will absolutely, positively, without remorse, without looking back clean up the plants this year, especially since I’ve put my resolve down in words.

At our house we have a saying when we’ve rambled on too long with an anticlimactic tale. We add for the storyteller, “And then you found ten dollars.”

So….And then I found ten dollars.