I had ‘the talk’ with my folks about Santa when I was in third grade. My sister and I did it together, and I have a sneaking suspicion that Elaine may have already known because she would have been an old fourth grader, but as we all know, things were simpler back then and other kids didn’t scream out a secret that has been kept for centuries.

My second grade Christmas began around two in the morning when I sneaked out of bed and sat at the top of the stairs. I couldn’t see downstairs because Dad had installed a door at the landing, which let the upstairs be shut off from the downstairs. That door was shut, and it squeaked, and I didn’t dare open it, so I sat there listening so hard that the only thing I could hear were sounds in my head. 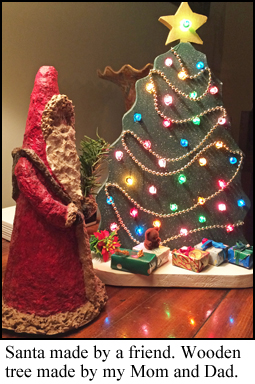 Then Dad came and sat down beside me. He didn’t go for small talk like what-are-you-doing-out-of-bed-in-the-middle-of-the-night stuff.

“Do you think he came?” he asked softly.

“Let’s go see,” he said, and we walked down the stairs to that door that hid the promise of Christmas splendor. We made our way to the tree and I squinted to see in the blackness if there were presents.

Santa had come! We hurried back upstairs to wake up the rest of the troops. Mom was already in a robe, so she had to have known that Dad and I had gone on a reconnaissance mission. It took less than a minute for the house to be in an uproar.

My brothers and Elaine and I piled downstairs. Dad plugged in the lights on the cedar tree that had already dropped three hundred sharp dry needles. Mom was already in the kitchen and had plugged in the percolator, and my memory of that sparkling pre-dawn morning is permeated with the scent of coffee. After the opening of gifts, Mom and Dad went back to bed and let us stay up and play. Elaine and I got bride dolls that Christmas.

Before my third grade Christmas, I’d been thinking about how Santa got into our house. We didn’t have a fireplace.

One night I asked Elaine if there really was a Santa, and she said we’d better ask Mom and Dad. Early the next morning, we climbed on their bed and Elaine the Brave said, “We think you are Santa. We think you get us presents.” 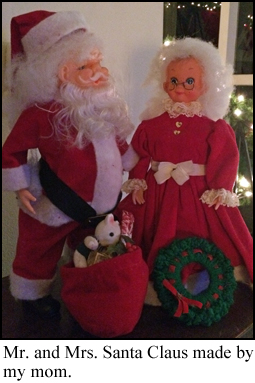 We promised, and when Christmas came a few days later, we acted as surprised as the boys when Santa left presents.

Fast forward a couple decades and I was faced with the same dilemma of Santa and our boys. They came to ask the question individually through the years when it was time for each one to know.

I didn’t say, “Yes, Virginia, there is a Santa,” like in the old newspaper editorial, but in their times, I said, “Yes, Landon,” “Yes, Morgan,” “Yes, Marshall,” there is a Santa. But he isn’t a big man in a red suit. Santa is the spirit of giving. And you can believe in him or not, but you don’t tell others. For me, the spirit of giving is real. I will always believe in Santa.”

And I still believe.

There are times that I think a man in a red suit must have visited us in the night. Once a new kitchen stepstool miraculously appeared under the tree. I’m a light sleeper, so Jim couldn’t have gotten up in the night to put it there. And one year a new flat screen computer monitor was hooked up to my computer in that night of magic. I know for a fact that Jim is incapable of loading the necessary software to make a monitor communicate with a computer, but then, the boys were home for the holiday, and I think he and the boys sometimes keep Christmas secrets from me.

But whether a red suit or the spirit of giving, I still believe.