Recently I did a little house maintenance and ordered a new doorknob (which had been broken four years) for the downstairs door. It was an expensive piece of special-order hardware, actually a door lever, which matched four others. I asked at the store that it be keyed to match the other doors. I even took a key with the lock number on it. The clerk who helped me was obviously new to the place, and several times she asked questions of an older employee.

“How will it be keyed like the other doors?” I asked as I glanced at the printed receipt, although I had mentioned this several times.

“Oh, I forgot to put that number on the computer order. I’ll amend it,” she said and wrote down the key number on a scrap piece of paper.

Of course, when FedEx delivered the new hardware, it had two shiny keys with it, and they did not match the other doors.

I wrestled with that disappointment for a bit and decided I could live with a different key on that door, which is the one I use almost exclusively. For years I left that door unlocked. With the new lock, I could actually lock it, quite an improvement.

The young clerk had made a mistake, but I’ll admit I’ve made one or two in my life when learning a new job. I didn’t want to be a person who made a big deal over something so inconsequential. I didn’t want to scar her for life by being the little old lady who threw a fit to her boss. I feel certain she found that piece of paper with the lock code and knew she’d messed up and not do it again. 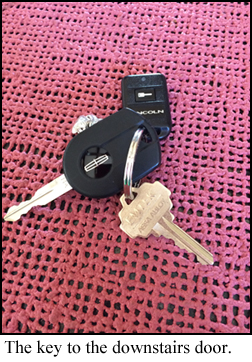 A couple weeks ago I was talking with a friend who’d had her kitchen remodeled recently, and although she’d picked out the granite for the countertop (from a small sample), she was disappointed that there was a flaw, a large streak in the stone in a prominent place. She wondered if she should have been more forceful with the installing crew and had them replace it.

I asked how granite could have a flaw. It’s a result of fire hot heat or centuries of pressure or layers of sediments or something like that, so the look is just a reflection of the life of the stone. (As an aside, I’ll admit that the lowest grade I’ve ever received was a C, and you guessed it, in geology. Really, how can you get excited over a bunch of rocks when there’s so much more to college?)

So I asked my friend about the flaw. Wasn’t it more likely that the granite had a scar from a time in its formative life?

“A scar?” she said. “I like that way of looking at it. I’ve got plenty of scars myself.” She decided she’d run her finger across that brown line each day and remember how much she’d learned from her own scars.

Most lessons in life leave scars. Bike wrecks leave their obvious physical marks on knees and elbows, but really big lessons in life leave scars on the inside, on our minds and hearts, and those lessons are inflicted by our own bad decisions or by other people’s decisions that affect our lives or by the loss of people dear to us or by countless other ways. It’s best to remember how we got our scars so we can learn from them and also learn not to inflict them on others.

Really, sometimes all we need is a new key.