How I Overcame My Fear of Snakes

The other night Jim and I watched a documentary on snakes, which reminded me of how I overcame my incredible, out-of-proportion, chicken-hearted fear of snakes.

Years ago on a Sunday afternoon, Jim yelled for me to come into the living room where he had just seen a snake poke its head out of our little (18×12-inch) model of a log cabin that sat on our bookcase.

We’d gotten the cabin from Jim’s folks, who had stored it in their basement for 20 years. They brought it to us in their station wagon, carried it into the house, and put it on the piano until I had time to clean off a spot on a bookcase. I carried it to the bookcase, and it sat there for a couple weeks until Jim saw the snake. I think it got inside the cabin while it was in my in-laws’ basement. I think it lived with us for about a month. 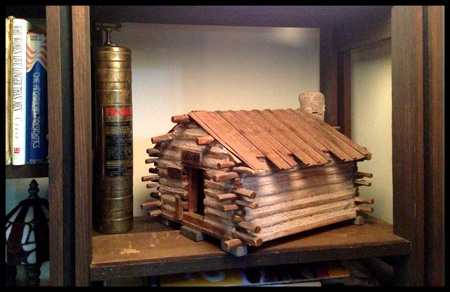 It was a black snake, about two feet long, so Jim, my hero, carried the cabin outside, put a stick inside until the snake wrapped around it, then carried it to the woods and let the snake go.

Don’t snakes come in pairs? I started hearing snake noises, like the rustle of a snake across a stack of newspapers. I imagined that the snake in our log cabin had crawled out and eaten crumbs under the kitchen table while we were sleeping. I wondered about the life of this snake and read some books on snake habits. Did you know snakes use their forked tongues to smell?

My snake imagination was taking on a life of its own, especially during the night, so to get the fear out of me, I wrote a kids’ story about a snake trapped inside a human home–from the snake’s point of view.

It worked. After I wrote that chapter book and happened to see a snake, I thought of Jake, the name I gave my storybook snake. And my heart did not double its beats, and I was not afraid.

Not long after I wrote that book, one of our sons hit a baseball that went into the iris bed. One of the boys went after it, and they all ran in the house yelling there was a snake in the flowerbed. I earned their respect when I went out and calmly picked up the ball that was six inches from a little garter snake.

But, true confession here. I wrote that book years ago, and yesterday on our morning walk, Jim looked down at the asphalt and calmly said, “Snake.” I jumped about a foot and did a foolish dance I hope no one caught and puts up as a U-tube video. The snake was dead, run over by a car, and it was small, but I guess it’s time to write another snake book.

[Commercial alert: The Snake Who Loved TV is now available as an e-book for Kindles and Nooks.]