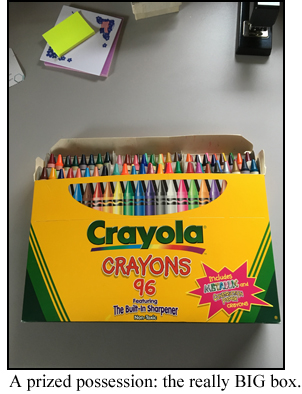 When I was a new mother of an infant son I went into a Ben Franklin store and opened a box of Crayolas and inhaled deeply. I thought of the day I would buy crayons for Landon.

I have always loved the smell of Crayolas, probably because I loved school. I liked learning, although I didn’t think of it like that back then.

I have two boxes of Crayolas in my office today. I don’t color with them, but I smell them on occasion, and they transport me to carefree coloring book days of long ago and the first day of school.

Years back I was assigned to write a coloring book for Barbour Books. When it was released, I gave a copy to a friend, and she gave me a box of Crayola crayons­­­­­­­­––96 crayons. It even had silver and gold colors, which I had coveted back in the day from young friends who had a box of 48. I had never had more than a box of 12 in my life. That was on the school list of required supplies, and my folks didn’t have the extra money to splurge on nonessentials. 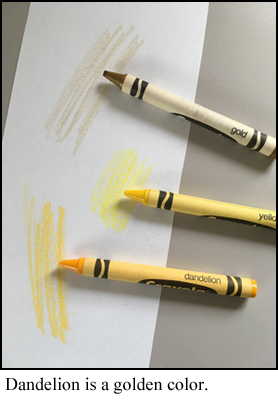 When I started this MFA grad school, our son Marshall (probably Abby’s idea) gave me a box of 24 Crayola crayons. I took them with me to Maine and smelled them in my room. They smelled like a new beginning. I may take them back with me this summer when I go for the ten-day residency and my graduation.

Now Crayola has decided to give up the color dandelion. It’s one of my favorites. I thought that gold crayon was magnificent until I compared it to dandelion.

I think dandelion was called maize in my youthful boxes or maybe even yellow-orange. 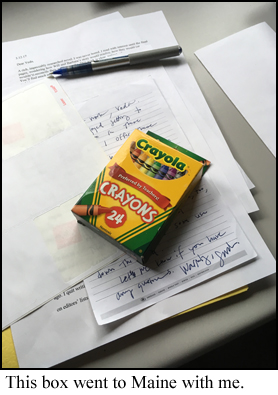 The yellow crayon is what you’d traditionally think of as yellow on the primary color wheel, but dandelion is truly golden, not a sort of brownish color like the gold crayon. I know some of you will argue with me, and I put my gold wedding band beside the gold color, and the lab folks at Crayola did a good job of matching it.

Both my boxes have dandelion in them, and of course I intend to keep them, not because of their so-called collector’s value, but because I love the smell. Crayolas rank in my favorite smells right below 1. freshly cut grass and right above 3. a cuddly baby (as opposed to a crying-in-need-of-a-diaper-change baby) 4. baking bread and 5. popcorn in a movie theater.

Smells transport me to a special memory. What are your favorites?