If you want to enrich your life by discussing books and ideas and developing deeper friendships, why not make starting a book club your new year’s resolution?

January reminds us of new beginnings, and that’s how one of my book clubs began, as a friend’s new 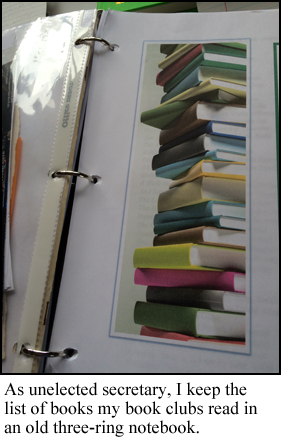 year’s resolution. Other than a couple of us, the others she asked to join were women she wanted to know on a deeper level than at social functions. So our monthly morning gatherings were in homes, with the requirement that the hostess serve coffee and tea and water. No treats necessary, although I’m the only one who has now and again gotten away with offering no morning spread. Now, fifteen years later, we’re still going strong, although members have moved away or moved on and new members have fit right in.

A neighbor started my other book club, and it has had an assortment of readers through its seventeen years of evening meetings. Jim and I are charter members, and the neighbor who started it moved across town, but is still at the core of our group.

Rarely do we all like or dislike a book, be it fiction or nonfiction, adult or young adult, a Pulitzer Prize winner or a mass market paperback. A couple times we’ve all read different biographies of the same subjects then compared them. Some of us check out books from the library or order cheap used copies or read Kindle versions. Occasionally we have to buy a new hardback and actually support an author. Discussions have become lively as we’ve debated our opinions.

Through the years, the hour meetings of both groups have increased to two hours, and although we always discuss the book and its themes that apply to our own lives, we also venture into personal issues. Friendships have grown and real trust has developed, all through the sharing of books and ideas.

We have read some outstanding books. We’ve also read terrible ones, and I believe their authors were related to the acquiring editors. 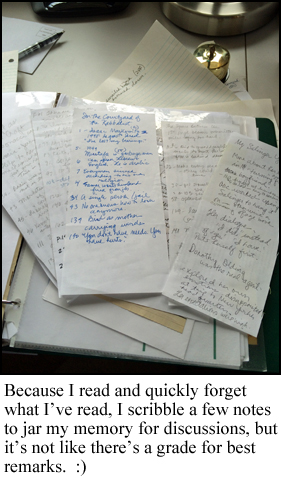 We choose our books by a member’s suggestion, but the member does not have to have read the book. I’ve read books I would never have picked up. My list of books-I-should-have-read-but-avoided could stretch to the moon, but I’ve now read some of the classics.

So, I repeat, if you want to enrich your life by discussing books and ideas and developing deeper friendships, why not make starting a book club your new year’s resolution?

Here are the books I’ve read in my book clubs. I won’t mark the winners from the losers, since we all like different types of books. You will notice duplications where I conned one group into reading a book that I’d read in the other club, not just because it was good, but also so I had less to read at a busy time in my life. I’ll bet you’ve already read a number of these books.