Nearly sixteen years ago, Jim had his first cancer. The day of his surgery, my sweet niece April took off work to be with other family members at the hospital. We sat in the waiting room, playing cards to pass the time.

With no table available, we sat cross-legged on the floor.

“Aunt Veda, you need new shoes,” April said, looking at my well-worn deck shoes. The leather was scratched and stretched, the heels run down.

“I have new shoes,” I said. “I dug in the closet for these because of all the days in my life, I need comfortable shoes today.”

I glanced around the waiting room and saw people in various modes of dress, and I identified with the ones who didn’t care one whit about their appearance, but were more concerned with feeling comfortable so they could get through a hard time.

But I’ve never been overly concerned with fashion. 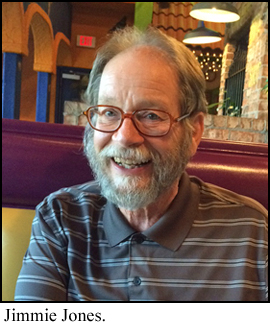 A few years ago Jim and I were on a road trip to Galveston to visit a friend. We made it a two-day trip and had an okay continental breakfast in the hotel where we’d stayed overnight before making a fairly early start on our second day of travel. Shortly after ten, Jim was a bit hungry, so we stopped at Jack in the Box for a breakfast sandwich. We got a #4: coffee (I don’t drink it), a glass of water, an egg sandwich of some sort, and hash browns (who doesn’t like those?).

At the table, I tore a small portion of the sandwich for myself and left the rest for Jim. We broke off bits of the hash browns, dipped them in lots of ketchup, and discussed what time we’d arrive in Galveston that afternoon.

A couple across the way glanced at us, as people glance at strangers. Since I finished my small portion first, I left Jim to enjoy his coffee and headed for the ladies’ room. When I returned, Jim looked like he’d been stunned.

“You won’t believe what happened,” he said. “That couple left, and then the man came back in and asked if he could buy us another breakfast. They thought we were sharing because we couldn’t afford two meals.”

Did we look down and out? We’d both showered and put on clean clothes at the hotel that morning, but we wore comfortable clothes to travel in and I wore old shoes I could easily kick off while in the car and slip back on when we made pit stops. 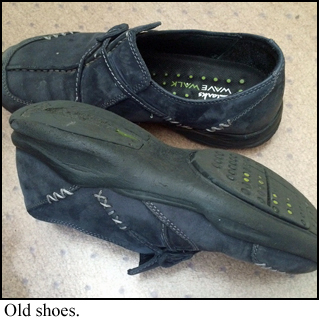 “You can’t judge a book by its cover,” I said, not being one bit original, but as the queen of bad paperback covers, I believe it’s true.

We chuckled at how we appeared to others as we climbed in our nice car to continue our trip.

And we both vowed we wanted to be like the people who had offered to buy us something to eat.

Now that Jim faces surgery again (the fifth primary cancer for this Vietnam vet, draft #57), I’ll stay with him in the hospital so I can feed him ice chips and hold his hand. He’s an optimistic guy with a lot of friends, and I think both his attitude and the support of others has carried him through the other health crises he’s been dealt.

Of course, I’ll make it home from the hospital once a day for a quick shower and clean clothes, but you can bet when I return to his room, I’ll be wearing old shoes.