The Scent of Christmas

When I was a kid, two weeks before Christmas we went to Aunt Punch’s farm and cut down a cedar tree. Many cedars dotted the hillside beyond the creek, and we had our pick. We argued over the one that was fullest, the one that was the right height, then Dad sawed it down. He wrestled it into the trunk, tied it down, and at home he anchored it in a bucket of dirt with rocks wedged in place to keep it solidly upright, so it could withstand the rambunctious decorating by me and my sister and brothers. 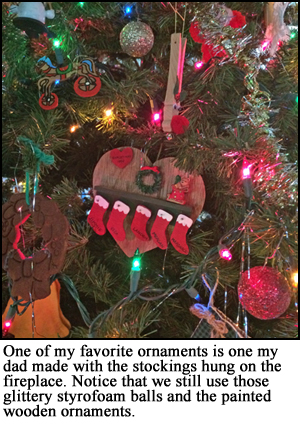 The fragrant smell of cedar permeated the living room. I’d walk up to the tree after it was decked out and just take deep breaths of Christmas. Of course, we watered it every day, but by the day after Christmas when we took it down, dry needles bit into our hands.

Fast forward to the time when I was a single gal and living alone. The office purchased a new Christmas tree and took secret bids on the old five-foot aluminum tree with few branches. I bought it for $1.50

No lights could go on this metal tree, so I covered Styrofoam balls with glue, rolled them in glitter, stuck unbent paperclips in them, and hung them on the tree. A blue-glittered Styrofoam star topped the tree. I, as a poor but independent adult, had my first Christmas tree that sparkled and shimmered, but it didn’t smell.

After Jim and I married, we decorated his eight-foot lemon tree with my Styrofoam ornaments. I got a paint-by-numbers ornament kit and painted wooden ornaments, both sides, and hung those, too. If I crushed a leaf, I smelled tart lemon, not really a Christmas scent.

Later when Landon was a couple years old, we decided to get a real tree, and although it was pine, not cedar, the evergreen smell was there. We bought it off a lot, and Jim put it in a bucket of sand from the sandbox. For a couple days all was fine, but then the smell of Christmas soured. I’d been watering the tree to keep it fresh, but the smell coming from the needles was anything but fresh. 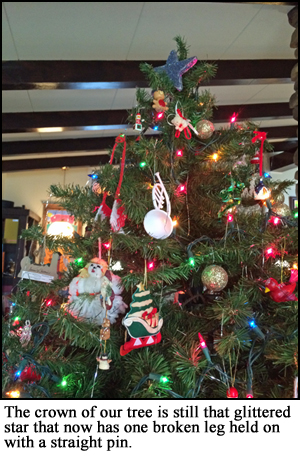 Of course, I knew we lived with neighbors who loved cats. Millie had eleven, and the Bailey sisters had seven. Turns out, when the lid was left off Landon’s sandbox, their precious cats had thought it was a litter box. When I watered the Christmas tree sand, the smell became noxious.

Friends who were leaving town for the holidays took their tree down and brought it over for us, so we decorated another tree and put it in the living room. From then on, we used a Christmas tree stand to hold our evergreen upright.

Fast forward again several years. Jim took Landon and Marshall to the Christmas parade, but Morgan felt sick, so we stayed home. The next day I took him to his pediatrician.

“Morgan is here every Christmas season,” she said. She pursed her lips in thought. “When did you put up your tree?”

“Yesterday,” I said, and then the light bulb went on. “You don’t think…” 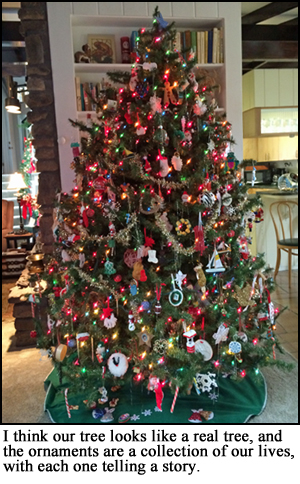 And that was that. The last year of the real tree. We undecorated that tree, and by now we had lots of ornaments as gifts from friends and family, and we carried that tree outside. Some friends hadn’t purchased a tree yet, so we gave it to them.

We went to six stores before I found a tree that looked real. It was the display tree, but we bought it and disassembled it. Limbs were piled in two carts, and a couple fell off before we got to checkout.

The next day, we decorated the tree with all the ornaments we’d collected through the years. It was a beautiful tree, but it didn’t smell, and I didn’t dare spray evergreen scent for fear of harming Morgan.

We still use that lovely tree, and we can put it up more than two weeks ahead of Christmas without it drying out. People have asked me if it’s real, it looks that good. But it doesn’t smell. And although Morgan hasn’t lived here for years, he visits during the holidays, so I don’t spray an artificial scent.

Now that it’s the season and Christmas trees line up outside stores while awaiting good homes, I walk along and smell each one. And I’m transported in time to when Christmas was the scent of an evergreen.