Some people are born risk takers. I’m not one of those people. And yet, I stepped out of my comfort zone and actually tackled a monumental project knowing that the outcome could prove disastrous.

Disastrous is a word that means different things to different people. It could apply to the world wide natural disaster that cost the dinosaurs their lives or it could apply to my kitchen after I’ve managed to produce a tough-crusted lemon pie from scratch with one-quarter-inch meringue.

The disaster I’m referring to concerned a Boston fern Jim gave me our first Easter together–nearly 40 years ago. It has remained in the same pot for all those years, and dead straw-like stems raised the live parts of the plant out of the pot by about six inches. Each day, dry brown leaves dropped to the carpet. 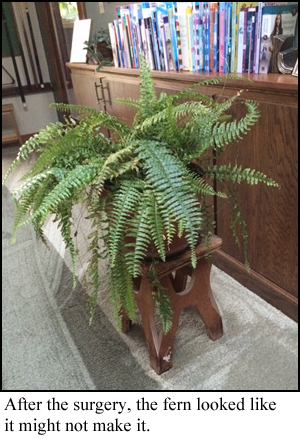 I thought it was time to try to save it with new soil and some fertilizer. But I was afraid, mighty afraid, that this important symbol of nearly 40 years of married life might not survive. It had made every move with us through those first years of marriage when we had several addresses. It’s been in basically the same spot now for our thirty-two years in this house, a part of the family. It has been here as a steady companion through Jim jarring against it as he paced the house to gain strength after life-threatening illnesses and through rowdy sons jostling it while roughhousing. It has been here through friends brushing against it to take a turn at the pool table, through Jim and I knocking against it while practicing the waltz when we took dance lessons, and through the crowd bumping against it at Christmas Cheers.

But it was time to take the risk of giving it new life.

I waited until my sister came to visit to tackle the operation. I needed moral support, and she’s the best at that.

We carried it outside and dug around the edges of the pot until the entire thing fell out. Oh! the tangled roots, some alive, some long passed on. There was little dirt. The fern must have been living on water alone and the occasional fertilizer that I added every month.

“This is pitiful,” Elaine said. “You should have taken care of this years ago.”

Yeah, yeah, I thought, but I didn’t want to risk losing it. 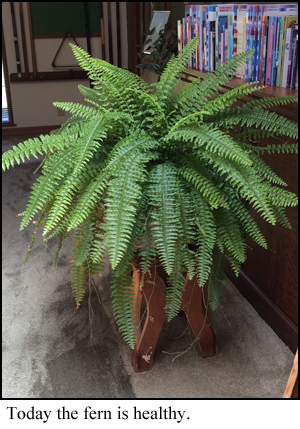 Elaine and I carefully unsnarled as many of the live leaves as we could and un-jumbled as much of their interwoven root system as possible. Then we buried the sustaining roots in new potting soil in the same old pot and watered them.

The result looked like the fern should be taken directly to ICU. I reconciled myself to the hard thought that the plant might not pull through. Each time I watered it (faithfully on Mondays and Fridays), I talked to it.

“You can do this. You can get stronger. Come on, roots, take this water to your leaves.”

That was last September. Here it is August, nearly a year later. It has taken patience and good care, but the plant is thriving. It has survived a grandson scraping against it as he races through the house and Jim once again pacing and brushing against it as he gains strength from another cancer surgery.

Although not as full, this fern is now as strong as the day Jim brought it to me. With its new go at life, it should survive decades longer. Its survival makes me think we should all take more risks and have a new go at life. New interests, new goals, new adventures. Why not?

Of course, the dinosaurs may have thought that before the earthquake, meteor, volcano, asteroid…whatever.