Under a Texas Sky 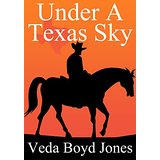 Although she loves her job at the Abilene Texas Tourist Bureau, Abby Kane sees her life as rather uneventful. Then the movie company comes to town to film on location at Fort Phantom Hill. Hired to help screenwriter Rob Vincent make sure the script is historically accurate, she falls under the spell of movie excitement and is enchanted with Rob. But someone is trying to sabotage the filming, hiding a deep secret at the fort. And she’s hiding a secret of her own.

Q: Why did you set this story at the old fort?

A: When I visited Fort Phantom Hill, I was captivated by the stark chimneys standing up to the harsh wind on that hill. The ruins spoke to me of long ago times and desolation. I wondered about the soldiers stationed there, but I haven’t written historicals for adults, so thought I’d just use the fort in a modern setting. A movie being filmed there seemed like a good idea, although I didn’t know much about movies, so I started research on that topic.

Q: Did you set out to write a mystery?

A: I needed something happening at the fort that would affect Rob and Abby, and the sabotage just came to me as I was writing. They aren’t sleuths, but they do stumble upon the reason why the sabotage was done and who did it.

Q: What’s the theme in this inspirational?

A: Like Shakespeare wrote in Hamlet, “To thine own self be true.” Abby wasn’t being herself by avoiding discussions of faith with Rob. Her light was not hidden under a basket, but she needed to have a frank conversation with him in order to be more true to herself.