Goodbye to the Sailboat

We sold our sailboat last week. It was time, but putting that final period on the last sentence in a long chapter of our lives was bittersweet.

I know the old saying that the best day of your life is when you buy a boat and the next best day is when you sell it. But I went into grieving a little bit for the loss.

I remember when we bought the boat. Jim had gone to a Chamber of Commerce event with an engineer from New York he’d met on one of his projects. Ralph was working in Joplin for six months and then would be in and out of town for the next year during the construction phase.

Jim came home that evening and said, “I think we bought half a boat.”

“Front half or back half?” I joked, then saw he was serious.

“We’d be half owners. Of a used sailboat. An old boat.” That was to make me understand that the monetary investment wouldn’t get out of hand.

“But you don’t know how to sail,” I reminded him. He’d once been a passenger on a sailboat on Grand Lake in Oklahoma, an hour’s drive away. I’d never seen a sailboat up close.

“I can read books on it. Besides, Ralph knows how to sail. He’s got a boat up on Lake Erie. I’ve got it all worked out.”

And he had, and I agreed. I figured it was a male thing. Man against nature, taming the wind. Jim could take our three sons out leaving me at home with a good book. 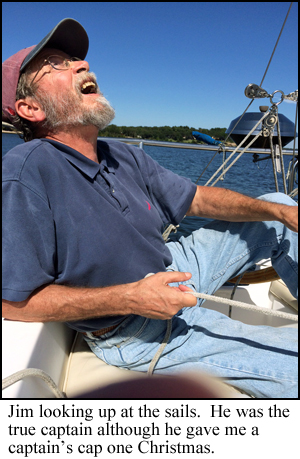 I went with Jim on the February day he bought the boat, over 21 years ago. It was one of those rare 70-degree days that we get every February, but still think they’re rare. The former owner took us out for a sail and let Jim take the tiller. I wore a life jacket and held on for dear life.

Jim read books on sailing, and when March rolled in with just a nip in the air, he took the boys down to scrub the boat.

“Fine,” I said, “but don’t take the boat out. Wait until Ralph comes back next week and gives you lessons.”

Of course, when they returned from the lake, I could tell by the sparkle in Jim’s eyes that he’d done more than clean.

“You took the boat out,” I said, a statement, not a question.

“It was cool,” one of the boys said, and he wasn’t talking about the temperature.

I, of course, waited until a warm day to go with them. And I took my time looking around the insides of the boat, much like a camping trailer, while they took the covers off sails.

A tiny kitchen (galley) boasted an alcohol stove and a sink. The bathroom (head) occupied a two-foot space between the sleeping area (V-berth) and the eating space with its folding table. Under the upholstered benches (more berths) were supplies needed on a sailboat, from a first-aid kit to a bucket. 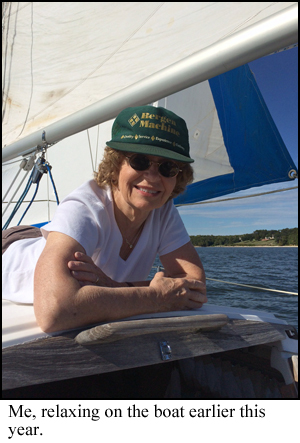 We motored out of the cove, then Jim raised the mainsail. “Pull on that sheet,” he called. I grabbed an edge of the sail since it was the closest thing to a sheet I could see.

“This rope?” I pointed to the rope that connected the boom. I knew how that horizontal pole got its name. If you didn’t duck when it swung toward you, well, you follow my drift.

“That’s it, but there’s no such thing as a rope on a boat. The minute it comes on board, a rope is a line.” I thought Jim had read a few too many sailing books.

We got underway and I asked, “Where are we going?”
“Can’t tell until we get there. According to how much wind we have.” It was ten o’clock. If we wanted to dock by five, we would sail forward for half our time, around one-thirty, then turn around and head back.

We had a gorgeous time that day. I shucked the binding life jacket and enjoyed the sunshine and the soothing sound of lapping water as we cut through the lake. And when we were heading back in, we saw another sailboat.

“Bring in that jib,” Jim called to his little crew.

“Although the loser may deny it, when two sailboats are on the lake, there’s a race. And we’re going to win this one.”

Through the years, I learned some of the vocabulary and quit calling everything a gadget. We anchored out and spent some nights on the boat, charcoaling on the grill we’d affixed to the back rail of the cockpit.

And through the years, mostly in the spring and autumn, we took many friends sailing, had lots of laughs, and had a few adventures when the lake turned from peaceful to white capped. In summers, night sailing was the only time the wind came up and the heat went down and the moon shone a streak across the water. 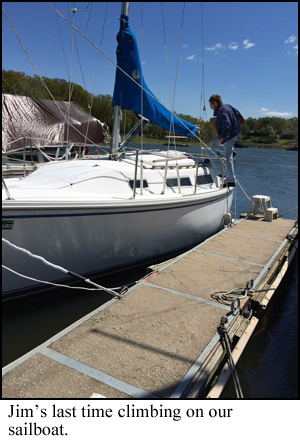 What is it about being on water that makes a person relax so?

Our sailboat partners came to sail for a week about twice a year, and each year we held a meeting about continuing the partnership, paying for the tag and the slip fee and the dues at the sailboat club where we docked the boat.

The last few years, Jim and I used the boat less and less: too windy, too rainy, too busy, too hot. Those summers of late night sailing had passed us by a decade ago.

Last week we assessed the boat and the needed maintenance and our creaking joints as we crawled over the boat. Ralph talked to the club caretaker, who made a few calls. Within two hours we were exchanging hard cash for our signatures on the title in front of a bank’s notary.

It happened too quickly. I didn’t get to say a proper goodbye. Now I only have memories of the sailboat, albeit great memories.

I didn’t know my last sail was my last. But that’s how it is with many things in life. We don’t know the last time.