I am not a musical person. Oh, I can read music, thanks to music class at Intermediate School, but the joke around home is someone else saying, “I used to wish I could sing; now I just wish you could.”

I actually had choir in ninth grade, one of those fine art requirements, and I tried out for the elite high school Cecilian Choir like everyone else in the class, but didn’t make the cut. No surprise there.

My extended family, and there are a lot of us (I have 43 first cousins), are musical folks. At our September family reunions, a band of cousins plays while we eat fried chicken. One year, a cousin insisted I play an instrument, since my family (brothers and sister) was not represented in the band. He strapped me into a bass guitar, and I had a total of two chords to play, and I got them wrong most of the time even though he pointed at me when I was to make the switch. 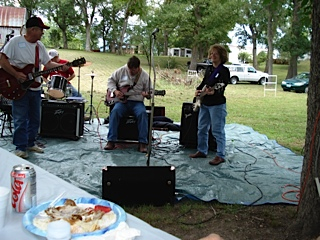 I drew up a bucket list an easy 15 years ago, and along with seeing whales (check) and Mesa Verde (check), was singing karaoke. What would it be like to hold a microphone and belt out a number?

I crossed it off my list, but I didn’t sing solo. My friend Patti Nicoletti Johnson, who actually has a CD and sings at events, went up to the front with me, and we sang “Will You Still Love Me Tomorrow?” Carole King’s song. I was pitiful. My hand shook as I held the mike, but I croaked out the words as they played across the screen.

I don’t care for classical music. It makes me nervous. Jim dragged me to hear a symphony once, but featured was American composer Ives, who specialized in discordant sounds. I’ve also heard Mozart with a different symphony, and it was better.

When I hear jazz, I react like hearing fingernails on a blackboard (as if those existed anymore).

But one night when Jim and I were already in bed, me half-asleep, he had the TV on, changing channels, which seems to be his joy in life. He clicked by the public TV channel, then right back. There they were, the Moody Blues, and we were both transported to a time in our past when we were carefree college students.

We were tired, but we propped up the pillows and watched for the next hour and a half, even waiting through the donation solicitations, for the next segment of the concert.

Music transports me. I associate a song with a moment in my life, and I am back there: watching the Beatles on Ed Sullivan, staying in the car listening to the end of an Elton John song before I get out and put gas in the tank, dancing to “Brown Eyed Girl” at a wedding.

We don’t have to have musical talent to appreciate it. We just need to find the music that has a beat that makes us move or has lyrics that make us think.

I must add that I have a musical family now. Jim was actually in ROTC choir in college and plays the piano, and our three sons took piano lessons. Morgan has perfect pitch and has taught himself to play the guitar; Landon has wicked moves on the dance floor; Marshall can still play his recital piece from long ago.

And I sing along with an old song on the car radio, when no one else is around except Jim, who shakes his head and grins.