My sister is 17 months older than I, but we were just a year apart in school. When she started first grade (no kindergarten in our tiny Arkansas town), you might say I did, too. Elaine came home each day from school and taught me what she had learned.

We were probably 11 and 12 when we talked about our romantic future. Three things: we would grow up to fall in love with brothers; we would marry them in a double wedding ceremony; we would never marry someone with a common name like Smith or Jones.

We planned somewhere along the right lines. Three things: we fell in love with brothers; we married them nine years apart; our married name is Jones.

We wished we were twins, and on a rare occasion we’ve been mistaken for them. That Elaine’s several inches taller than I should negate that thought, although we do resemble each other. We are also very different. Examples: working a jigsaw puzzle, she looks at colors while I look at shapes. Looking at a sequencing radar map, she looks at future weather, I look at past. She trusts; I doubt. She accepts; I want sources. (Okay, I’m circling around saying I’m judgmental, but there it is, and I’m working on that.)

Still, there have been many moments of ESP in our lives, or as we call it around here, ESP-N.

I have reached for the phone to call her a moment before the phone rings, and it’s Elaine.

Just the other night I thought I’d watch a movie. A couple days earlier on a multiple-FaceTime call, our youngest brother (we have three) recommended This Beautiful Fantastic, and since the title made no sense to me, I didn’t remember it, but I knew Elaine had written it down, so I started to text her to ask, but at that moment a text came in from her with nothing more than the three words of the title.

You may think those things are coincidences, but here’s the clincher.

Fifteen years ago, my book club read Midnight in the Garden of Good and Evil. I wasn’t caught up in the account of the murder, but I was captivated by the author’s description of Savannah, and I coveted the statue of Bird Girl on the cover. Jim and I planned to go see those historic squares, but we didn’t make it, so I took a solo road trip to Savannah last year. (See February 2019 essay)

Only one company has the license to make statues of Bird Girl sculpted by Sylvia Shaw Judson in 1936. My sister-in-law Vicki has owned one of those replicas for many years. Each time I visit Kentucky, I stare at that statue. Bird Girl is elegant, graceful, serene. She brings me peace.

So, you may be thinking I should have ordered Bird Girl. The thing is it’s hard for me to buy things for myself. I can give away money, but spending it on myself isn’t a part of me. I have everything I need and most of what I want. I just don’t want much. I’ve always adhered to the Ozarks motto: Use it up, wear it out, make it do, or do without.

Examples: Pictures reveal I wore the same dress to my brother’s wedding nearly 27 years ago as I did to my nephew’s 14 years later, and I still wear that dress. An interior designer would shriek at my house, a style we call early-grandmother. (See January 2013 essay) Fashionable clothes and up-to-date furnishings are just not important to me.

But one afternoon a few weeks ago, I sat at the computer and, as I have many times through the years, pulled up the statue of Bird Girl. I spent time looking at the various venders for the same statue that is made by that one manufacturer. Finally, on impulse, I pushed ORDER. I planned to put the statue in a rocky area at the back of the house. Of course, I immediately had buyer’s remorse, but told myself, “Nope. It’s done.”

Elaine knew I loved Bird Girl since we’d talked about the statue last October in Kentucky— seven months ago. But at the very same time I sat at the computer looking at Bird Girl venders, Elaine said to her husband, “I want to do something for Veda that she will never do for herself.” He agreed. She texted with Vicki about where to get the statue, and Elaine ordered it for me on that very same day. She planned for it to go on the ledge above the front porch.

When I told her I had ordered the statue, she was rightly stunned, but she refused to cancel her order or keep Bird Girl for her garden.

So now I have two. One in front and one in back. They want to be twins.

A coincidence? I think not. 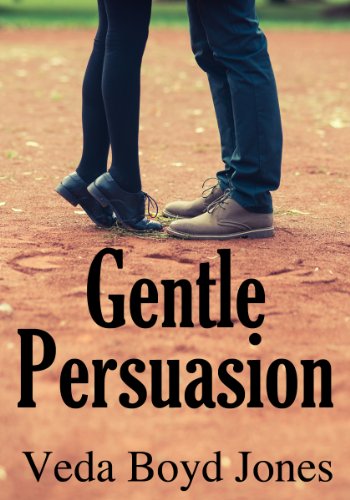 Opposites and Compromise–Injured in a ski accident that ended his Major League Baseball pitching career, Dallas Stone opens a sporting goods store in a small Missouri town. Julie Russell teaches English in the high school and is from such a sports-minded family that it turns her against sports in general. An unlikely pair? Absolutely. But can Gentle Persuasion bring them together?
Download your copy today!